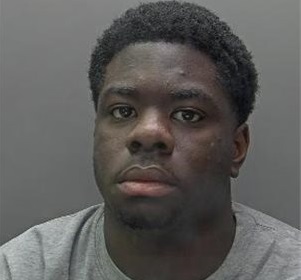 A man has today (Monday 17 January) been sentenced to four years and four months for stabbing another man during a violent assault in Watford town centre.

During the seven-day trial at St Albans Crown Court, the jury heard how Boothe attacked a man outside the McDonald’s restaurant on Watford High Street at 4.45pm of Friday 7 February, 2020.

A large number of people in the area – including young children – witnessed the violent stabbing where he set upon the victim, who was riding his bike, and stabbed him in the chest. The victim retaliated by throwing a chair at the attacker, who then ran from the scene to a waiting BMW in Smith Street. By this time the 19yr old victim was bleeding profusely but managed to get himself to a nearby convenience store to ask for help before he collapsed.

The emergency services were called and the police officers first on scene were able to administer lifesaving first aid.

Paramedics and the air ambulance team arrived on the scene were able to administer lifesaving first aid and then was flown to a London hospital for further treatment. It was later discovered that he suffered a punctured lung.

Boothe was arrested, charged and remanded within a few days, and following his initial court appearance was remanded back into custody once again.

Detective Constable Jon Holmes, who investigated the assault, said: “It is no exaggeration when I say that the victim is lucky to be alive today, and we could have easily been investigating a murder.

“This was a very serious incident and Boothe gave absolutely no thought to the potential consequences of using a knife to viciously stab the victim in the chest.

“It has taken a long time to get to this point due to the coronavirus pandemic putting a huge strain on the court system, but I am pleased for the victim, his family and the wider public that we have finally achieved a conviction in this case.

“We will always do everything we can to reduce violent crime in Hertfordshire and this case is a perfect example of what would-be offenders could expect to face once arrested and charged.”

Elected Mayor of Watford, Peter Taylor, said: “There is no place in our town for knife crime. I am grateful to the police for their work on this case and for securing this sentence.

“Fortunately, incidents such as these are rare in our community. We must ensure people are educated about knife crime and that we do all we can to prevent more incidents in Watford.

“We will continue to work closely with the police, supporting the fantastic work of the Gangs and Schools team. We also want to make sure that the community are aware of the support services that are available. If you are concerned about someone you know carrying a knife, visit Knife Free (opens in a new window) for help and support.

“I want to thank our incredible NHS and emergency services for their quick response to this assault and ensuring it was not fatal.”