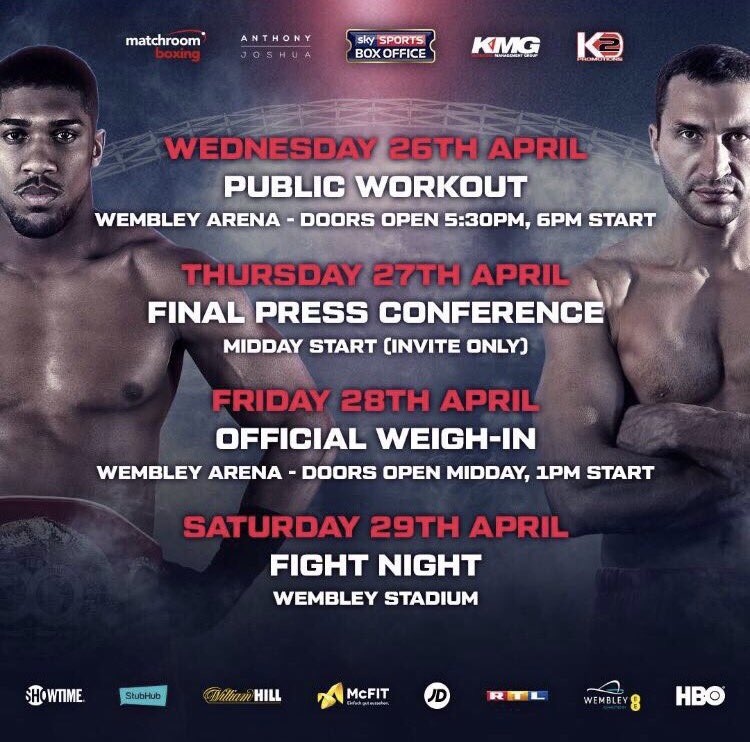 How weird is it that AJ has three times as many followers.

The biggest fight in British boxing history is just a few days away.

Joshua (18-0, 18 KOs) is set for the sternest test of his professional career against Klitschko (64-4, 53 KOs) who held various versions of the world heavyweight title from April 2006 until his defeat to Tyson Fury in November 2015.

The Ukrainian has not fought since that loss to Fury and at 40-years-old is thought to be past his best. However, having knocked out more men that Joshua has fought professional rounds, this will be a serious challenge for the undefeated Brit.

Joshua’s IBF belt and the vacant WBA strap will be on the line when the two meet.

Anthony Joshua can legitimately claim to be the best heavyweight in the world if he beats Wladimir Klitschko in front of 91,000 fans at Wembley Stadium in April, but the quiet man from Watford says he will not be consumed by the temptations that have wrecked so many champions.

Joshua could not say if Klitschko would be a tougher opponent than the unbeaten WBC champion, Deontay Wilder, who took nine rounds to get rid of Molina and was watching Saturday’s fight with the Showtime commentary team in America. “I haven’t fought either of them,” he said with a laugh. “I could watch them and say, ‘Wilder does this’ and, ‘Klitschko does that’, but it’s different when you’re in there. In order to beat Klitschko I need to improve to another level.”

The fight is scheduled for Saturday April 29th 2017 set to be £42m British record-breaker.

Anthony Joshua beat Eric Molina by KO in round three.