Three jihadis who attacked London Bridge on Saturday night were pictured dead in the street in Borough Market after being shot by police, with at least one of them wearing a fake suicide vest
News 4 June 2017  The Casualty Bureau number is 0800 0961 233.

This was the third terrorist outrage to hit England this year following the Westminster and Manchester attacks.

Total over the three attacks

Assistant Commissioner Mark Rowley said:  “At any one time MI5 and police are conducting around 500 active investigations, involving 3,000 subjects of interest. Additionally, there are around 20,000 individuals who are former subjects of interest, whose risk remains subject to review by MI5 and its partners.

“The security and intelligence services and police have stopped 18 plots since 2013, including five since the Westminster attack two months ago.”

Police say London #ParsonsGreen station explosion is being treated as terrorism. There have been four other major UK terror attacks in 2017 pic.twitter.com/3px31Aaitl

In the latest London Bridge attacks on Saturday 3rd of june:

Attackers brought carnage to the streets of the london, stabbing yet another police officer and revellers with 12-inch knives, reportedly shouting "this is for Allah".

The trio were pictured wearing what appeared to be explosive vests, with police later confirming they were hoaxes. In a statement by the Commissioner for the Metropolitan Police, Cressida Dick, "Last night saw another appalling and tragic incident in London; something we hoped we would not see again."

"It has now been confirmed sadly that seven members of the public have died. In addition, as you know, we believe three suspects are dead."

""My current information is that 48 people have been injured. They are currently being treated in hospital.

"To remind you, we were called at 10.08pm on 3 June to reports that a vehicle had struck pedestrians on London Bridge.

"That vehicle continued to drive from London Bridge to Borough Market. The suspects then left the vehicle and a number of people were stabbed. The suspects were shot dead by armed officers."

"Our priority now is to work with our colleagues in the National Counter Terrorism Policing Network and also with the intelligence agencies and other security services to establish more details about the individuals who carried out the attack and the background to it.

Theresa May thinks Britain is in the grip of a spate of copycat terror attacks in the wake of the London Bridge atrocity.

On a recent BBC Manchester Attack Question time, people spoke up about "Hate leaflets being distributed from Mosques". 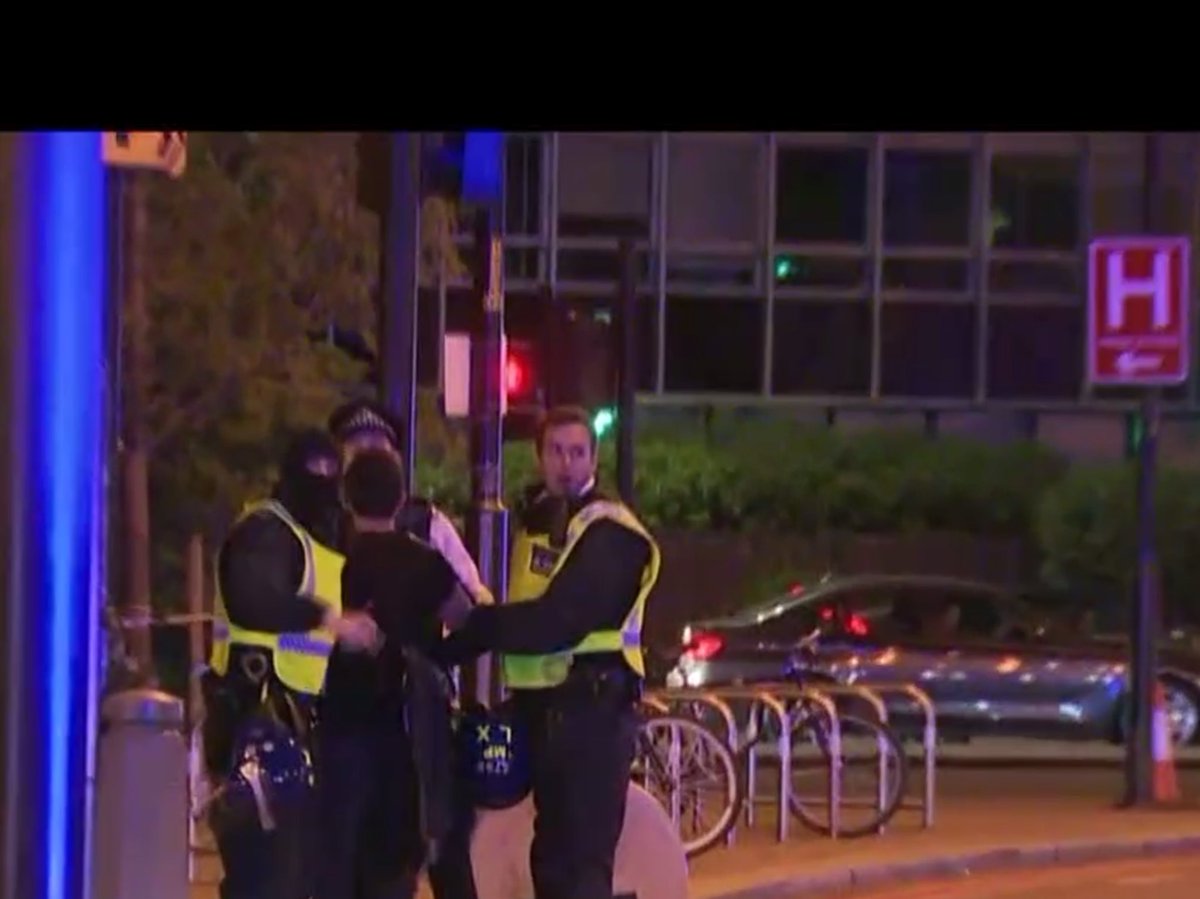 Local Bars have been evacuated. Also a Hotel near the scene.

WATCH | Man told not to be Islamophobic by man literally being forced to cower for his life during an Islamist terror attack. #LondonBridge pic.twitter.com/yKh9pAG6AA

Armed officers ran to a Man lying unconscious on the Floor.

Ex-military Witness who lives in Flat nearby, says he heard significant gunfire.

Witnesses on London Bridge reported seeing a white B&Q van swerve across the bridge before driving into "15-20 pedestrians" just before 10.30pm on Saturday evening.

So many ambulances, shoutout to the emergency services. #LondonBridge pic.twitter.com/FMH5U5RfVH

Downing Street said: "The prime minister is in contact with officials and is being regularly updated on the incident at London Bridge."

Authorities are warning people to avoid the area and London Bridge station has been shut.